Do you ever feel like someone is constantly trying to change your mind? I do. Most of the time, it's my kids who want to do something, and I'm firmly against it. They will reason and convince and beg and come at you from every direction to get you to change your mind. I don't mind discussing it with them, because often I'd like to make sure I'm not just saying no because it's the first thing that comes out of my mouth. But there are just some things that are not going to fly, and no amount of cajoling is going to change my mind. That's when I have to say, "NO. I've said my piece and counted to three." Usually I don't say it like that, it's just no, and that's it. But this is the scene playing in my head. (Another good movie -- "O Brother Where Art Thou?") Super quotable. Like this one:

But back to changing your mind, or being bullied into doing so. I can't. There are things that I have to constantly roll over in my head and decide if it's right to believe them or hang onto them, because the way the world is going right now keeps banging at my core values and asking me to abandon them. I read a lot, in a lot of different places. And opinions, BOY do people have them. I'll read something, and I'm like, hrm, I can see how they could believe that to be true. And then I'll read someone else's opinions, and kinda feel like I could see how someone could arrive at that conclusion as well.

I bring this stuff up to HB all the time, because he apparently has everything figured out already. It's always stuff in these little cracks that don't necessarily fit neatly into one envelope or another. He can explain stuff really well too, but I don't always agree with him either. And he's OK with it for the most part. But you know how sometimes things just don't settle right in your head or your heart? That's kinda where I am right now. I can't turn on the TV and listen to what's going on, I have to just turn it off.

I know I've said before that I'm not political. And I'm really not. I do my level best to not encounter politics at all in any form. Because it's not my thing. However, I'm not sure burying my head in the sand is the right response either. I am a Christian. And that can raise hackles for people, especially right now. Many people have experience with Christians who are more interested in waving a banner of all that they "won't stand for." For me, it all comes down to what Jesus said when he was asked what is the greatest commandment.
"Jesus said to him, 'You shall love the Lord your God with all your heart, with all your soul, and with all your mind.' This is the first and great commandment. And the second is like it. 'You shall love your neighbor as yourself.'" -- Matthew 22:37-39

I heard a sermon by a really great man a long time ago about Christians and rights -- we don't have any. When we accept the call of God on our lives, we surrender any and all rights and accept what God plans for us. Early Christians were thrown to the lions and used in all kinds of activities that exploited their so-called rights. Fast forward to the 80s, where I remember people in church boycotting a company because some rumor was spread that the founder was a satanist**. Yeah, that kinda stuff happened before the internet too, people. Some self-righteous lady got in my face one day at church because I was chewing a brand of bubble-gum that she was boycotting. Same lady also told me that she was looking forward to expelling me from our Christian school the following week because she felt like my hair was too short. Throw me in the briar patch! Anyway, that went a little sideways, didn't it?

It's hard being a Christian with opinions. And it's hard to know when you should speak up and about what. I feel like God has me in the place I'm in to demonstrate his love to the small amount of people He puts in my path to influence. I'm not always good at this, because I have opinions. And I like to talk about them. My goal in life is to take those two commandments up there and behave that way. I don't want to say or do anything that would violate loving God or loving my neighbor. It's hard, y'all!

There's another story in the Bible where Jesus tells a man this same thing. He wants to be a smarty, so he says, "Well, who is my neighbor?" Then Jesus tells him the story of the Good Samaritan and asks the man which person in that story was that man's neighbor. And the man said, "Oh. The one who showed mercy." BUSTED! Jesus didn't shame him, he just said, "Go and do likewise." (ref: Luke 10:25-37) That's what I want to do. I don't want to see someone suffering and cross the street so I am not affected or inconvenienced by their suffering. Easier said than done, right?

Anyway, all this rant was just for me today. I feel heavy and sad and kinda weird about how the world is flipping upside down on me. And how people I used to look up to are applauding it. Like somehow being American makes us better than the rest of the world. Like somehow our rights can be demanded and we ain't gonna take it any more. It just doesn't sit right with my insides. It feels wrong. Surely you can reach inside there and turn it over a few times and realize it too. Love God. Love your neighbor. Who's your neighbor? Go and do likewise.

** Reference for the satanist founder of P&G (also apparently P&G sued Amway multiple times for spreading this rumor, jury is still out as to whether they started it initially, but that's a funny twist, huh?): LINK
Posted by Doc Veebs at 5:38 PM No comments: 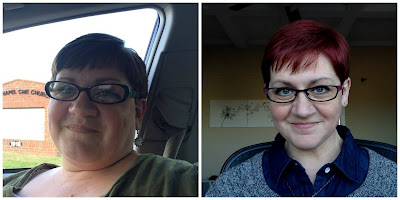