Having gone through two blocks of this already, you'd think I'd be all ready to go and tackle the next one. You'd think it'd be like the beginning of a new school year with new pencils and school clothes and all that stuff. NO. If you don't want to read a boatload of whining, just stop here. But if you'd like to get an idea of what doctors go through to be there for their patients, keep going.

I recently was made aware of something very interesting, and I thought I'd share my thoughts about it here. I saw a post online about Project Semicolon. In 2013, the founder of Project Semicolon wanted to honor her father whom she lost to suicide, and show how she had struggled with depression and suicidal thoughts as a result.  "The project was started by asking people to draw a semicolon on their wrist to show support. The semicolon was chosen because in literature a semicolon is used when an author chooses not to end a sentence. You are the author and the sentence is your life. You are choosing to continue," says Amy Bleuel Berg, founder of Project Semicolon. Many were inspired to tattoo the semicolon instead of just using a sharpie.
I don't recall a time in my life where I felt suicidal, but I have gone through some pretty deep depression at times. After having my babies, I went through various stages of the baby blues, so I was pretty sure I recognized that and had a good perspective while I suffered through it. However, after having my 5th child, I had a serious case of postpartum depression. I suffered from insomnia and extremely fearful thoughts that would just invade my mind and paralyze me at 2am. Insomnia + new baby + four other kids almost did me in. Thankfully, I recovered fairly quickly without spiraling downward further. Postpartum depression is a terrifying illness that many women suffer in silence, and so many women aren't as fortunate as I was to recover fully.
Project Semicolon got me thinking about how there are other times in your life when you feel like you're stuck -- like someone has placed a period and it's just over for you. I was a (fairly) happy stay-at-home mom to six kids, homeschooling, working as a doula, doing some work for CAPPA, and generally staying busy. BUT, I always had a dream of going to medical school and being an awesome doctor. I really felt like at 35 that I had given all I could offer to the world, and that maybe that was all that there was for me. I thought that it was too late to see where that dream might take me. At 35, I didn't start the journey thinking I was going to end up being a doctor. I thought I'd try ultrasound tech, and I was well on my way to getting that done when someone started building a medical school in Alabama. Sometimes I think about how if I had kept going with the ultrasound degree, I'd be doing that now, instead of fretting over exams and patients and the whole barrel of monkeys that is medical school. But then I think about how I'd probably be wishing I could be doing exactly what I'm doing right now.
So for me, the semicolon has a lot more meaning. I don't want to appropriate someone else's symbol at all, but in addition to being a testament that I am on the other side of crippling depression, it also means that sometimes when you think life has handed you a period, it's actually just a semicolon. Take the pause, and then get going on whatever adventure comes next!
Posted by Doc Veebs at 8:00 AM No comments: 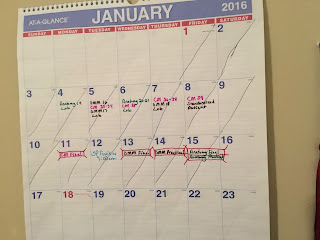 This is what my calendar looks like. I am officially 1/8 of a doctor, because block two is in the rear view, folks! A faculty member told us this morning before our anatomy final and practical that no one needed to leave town until grades were released in case we needed to remediate. I kind of felt like a murder suspect when she said that. "Am I under arrest?" "No, but don't leave town." I also had the thought that once I left the building, I was getting in my car and driving as far as I could go and I might accidentally leave my cell phone and all electronic devices with which I could possibly be informed that I needed to return. But instead I came straight home and refreshed my email every three seconds. I did get an email that everyone who needed to be contacted about remediation should have an individual email at that  point, so I think it's safe to say that I've passed everything. But they've not released the grades so I can see by how much.

So this is the part where I throw away all self-control and I stay up late and play video games and generally misbehave. It reminds me of the Jimmy Neutron: Boy Genius movie where all the parents get abducted by aliens and the kids go berserk with the misbehaving and that one kid is peeing in the shower. But then after a while of eating candy and missing school and running wild, they all start crying for their mommies. That will be me at the end of the block break. I will have slept for three days straight, and watched all the Netflix, and had it up to HERE with my kids' bickering and I will be begging for the structure of class again. If you've not seen the Jimmy Neutron movie, you owe it to yourself -- I still giggle about Poultra.

I don't want to be flip about the fact that I passed anatomy this block. It was absolutely the hardest thing I've experienced in medical school so far. We struggled through it as a class (well, for the most part, there were quite a few who didn't seem to have as hard of a time of it), and those who passed did so with much effort and loss of sleep, and possibly sanity as well. There are some folks who got the bad news that they didn't quite make it, and they will have to do some extra work over the break to get the material in. Hopefully everyone will clear the hurdle and get a bit of a break before we start back again.

This week was (kinda) the calm before the storm. We have one more week left in this block, and it will be full to the brim with three exams and two practicals. It was still a very busy week, with two anatomy labs and two OMM labs. We also had standardized patient (SP) testing too.
It's been a tough week for me, and I think it's probably just because I'm tired. A large portion of medical school (heck, almost all of it really) is holding your nose and getting through a bunch of tough stuff so you can be a doctor at the end of it. It's not miserable 24/7 for sure. The SP testing was really fun this time, and I really enjoyed "playing doctor." Not like that. Get your mind out of the gutter.
So assuming all goes well with testing this next week, I will be 1/8 of the way to graduation. That makes me almost 12.5% doctor. Scary, huh? Both times this block that I went into a room alone to perform a procedure or interview a patient, I kept thinking, "Hey, are you sure you trust me to go in here and do this?" I wonder if that feeling ever goes away. One of our instructors this week said that we may not feel like we've learned a whole lot yet, but next year when the first years start, we'll realize how much we've actually absorbed this year. I am excited for next year when the new class comes. I can't imagine how full the building (and parking lot!) will be when the class of 2020 joins us. It's extra exciting because my son is in that class!
SO then this conversation just happened:
HB: "What's wrong?"
Me: "My blog is blahhhh. It's a blaaahhhhhhhhgggg."
I started this blog to keep all my friends and family current on what's going on with me during school. I also thought I could be relatively clever and engaging at least on a weekly basis. Now I kinda feel like it's just me blathering into the computer about whatever annoying thing happened at school this week, and I'm sure no one wants to read about that. So I'm going to try to keep a notebook handy during the week to jot down some better ideas as they come to mind so this doesn't become a yawnfest. I couldn't stand to lose my four and a half readers, especially my Mom. ;)
Posted by Doc Veebs at 5:48 PM No comments:

So I'd love to regale you with wonderful stories of spending quality time with my family and friends, the laughs that we had, and the memories that we made. I'd really love to. Instead, I spent this week staring at my computer, an anatomy textbook, and two different anatomy atlases in order to complete the take-home assignment due before class starts back on Monday. Yes, I'm feeling salty about it.

I've also realized that everyone has kind of given up on waiting around for me to be available, and they've found better ways to spend their time. I don't think any of us realized the volume of time I would be spending studying. It hasn't really been an issue before now because I've been so very tied up. There were a few hours here and there during the break that I could have hung out, but everyone had something else going on. It was a little lonely and sad. But at the same time, I'm glad everyone has found stuff to keep themselves occupied.

I'm totally not ready for school to start back next week. We only have two more weeks left in the block, and it's going to be CRAZY. Then we get another week of break before block 3. Hopefully they won't decide to send a bunch of anatomy homework with us during the break. Yep, salty. That's me.

I don't do resolutions, really. There are some things that I'd like to be different, but my main goal for the new year is to keep my head above water. That will take just about all of my focus.
Posted by Doc Veebs at 9:38 PM No comments: