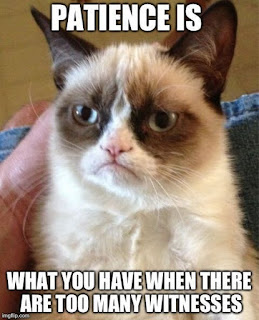 Waiting. I don't much like it. I don't know of anyone who does, really. Well, except for Annie. She doesn't seem to mind it much. Who's Annie? Oh she's just my seat mate, that's it. Nothing else special, really. And I say it like that because it's not true. If everyone really knew how much I absolutely love Annie, they would think I was a little creepy, and I probably wouldn't get to sit by her any more. So I keep my undying affection on the DL so I can sit in the periphery and just adore her. But the thing about Annie is she doesn't check her grades. Ever. I'm sitting here dying inside a little more every second because I'm waiting for them to tell me whether I passed the last cell bio exam because that will determine whether I get a break for the summer. But Annie? She's cool as it gets, she never checks whether she passes an exam or not. She has no idea what her GPA is, and she doesn't care. She also naps an awful lot. I think she might be the smartest person in the class, and she can just coast through like it's nothing. But it doesn't make me hate her, no. She's too awesome and fabulous and gorgeous for that. Also I hope she never reads my blog. Chelsea, don't tell her, k?

Anyway, back to waiting. I'm waiting on a lot of things, and it makes me fidgety and a little distracted. I know things tend to work out, and everyone tells me to stop worrying and that everything always works out and that I'm worrying for nothing. Really.

But I have this thing called experience. Like that time I went to the DMV for like four days in a row because I thought I had everything on the list so I could transfer my license from one state to another, but every time I came in, they asked for another piece of paper that wasn't listed on their website. So I'd have to go home and find whatever it was and bring it back the next day only to find out there was something else they needed. Apparently they aren't satisfied until you have a certified document signed by your elementary school principal and another document from your physician verifying the loss of your wisdom teeth before they will allow you to stand in line for the next 8 days to get your license. Don't get me started on verifying my hat size. But I say all that because things don't ALWAYS work out. Sometimes you do everything you know to do, and you might be very smart, and you work really hard and you still fail. These things have happened to me, and that's the thoughts that are jumping up and down in the back of my mind while everyone is assuring me I'm worrying for nothing. Because sometimes when I don't worry enough, things get messed up. So now I worry because I'm not worrying enough.

So the key is to translate all that worrying energy into something productive. Because you can. Worry can be paralyzing and a self-fulfilling prophecy. If I'm worried that I am going to fail, it keeps me from focusing on the thing I need to do NOT to fail. Studying. Sometimes I think I use worrying as an escape from studying. Stupid, right? I'll be sitting there with my notes and my computer and the words in front of me jumble together and mock me because I'm sitting there worrying about whether I can learn all the things. Well that sounds really stupid when I type it up and re-read it. Because it is. But it's what I do. So I try to get myself back in the present instead of worrying about the future. Being mindful of the present can break the cycle of worrying. I take a few deep breaths, and I acknowledge my concern, but I don't let it derail my progress. I make a list of the things I need to do in order to get the results I need. I even outline the things that I'm having difficulty understanding, because my natural tendency is to study all the things I know instead of focusing on the things I need to learn. Again, it sounds dumb, but it's pretty normal to avoid information that makes you uncomfortable because you don't understand it. Someone once told me that it is a good thing to get in the practice of holding your nose and enduring whatever difficult thing is in front of you, because life hands you that quite regularly (especially in medical school). I really appreciate that advice. Someone else also told me that time spent worrying is wasted time, and you should just decide to be happy. I think being happy expands your ability to learn.

I also know that it can be really hard to just decide to be happy. Sometimes the chemicals running through our heads can counteract the ability to be happy. That is different than just worrying, and it requires a little more help than we can give ourselves. That's also perfectly OK. If you've read this blog at all, you know I am the biggest advocate of raising your hand and saying I'm not OK. Please do that if you have done everything you can do, and you are still under it.

So I've blathered on about worrying and patience and all the things jumping around in my head. I hope that something I've said has helped, because that's pretty much why I sit here and write all this stuff down. I hope that all of the heavy stuff that I've been through somehow prepares someone gearing up to go through something like this, or someone who is feeling like giving up. Or maybe it's a cautionary tale for someone who really doesn't want to do it after all. The most important thing is to get through this process somewhat whole, and try to have fun while you're doing it. Until next week!