Block 6 Week 2-4: Mama says that alligators are ornery because they got all them teeth and no toothbrush.

Once again I have failed at keeping my blog up to date. I apologize, it has been BIZZAY lately. SO today's blog post is going to be Waterboy themed. You'll see why.

One of the most difficult parts about being a mom of six in medical school is when someone gets hurt. Zion (17yo) hurt his hand at football practice a few weeks back, and I happened to be out of town at a conference. This is strike #1 of mommyhood. I called and scheduled an appointment with the orthopedic doctor for him the next morning, but I couldn't get back home until later in the afternoon. Come to find out, he had a pretty serious spiral fracture in his hand. Also, since I didn't attend the appointment (strike #2), he managed to beg his doctor to allow him to play in the last game of the season. With a broken hand. 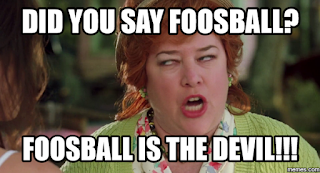 So fast forward to this past Tuesday AFTER the last game of the season (which they lost), and we find out that his hand did not heal right, and he has to have surgery. They scheduled his surgery for Friday morning at 6am. Well, Friday morning at 6am, I was expected to be loading up to head to the Middle of Nowhere High School where a group of us medical students presented a "Mini Med-School" to freshmen. Oh yeah, strike #3. I tried to get out of it, but it wasn't a possibility. So, I left his Dad in charge and drove out to the boonies to give my presentation. We finished pretty early in the morning, so I had a chance to actually get back to the hospital before he woke up from recovery. Well, that is, until I tossed my KEYS in the trunk and shut it without realizing. So not only did my son wake up from surgery without his mom, I had to call his dad away from the hospital to help me get into my car. The poor baby woke up looking for his parents and NEITHER of them were there. What happens when you get to strike #4? I'm pretty sure I've lost my Mom Card.

So to make up for my glaring failure as a mother, I took the night shift last night. I set an alarm on my phone to wake up every four hours and take his temp and give him meds. The poor baby has been apologizing for needing to be taken care of, and I feel like a complete heel.

I was really hoping when I went back to school that my kids wouldn't have to take the brunt of my absence and raise themselves. I always wanted for them to have the type of mom that sent them off to school in the morning and greeted them in the afternoon with cookies and that whole Leave it to Beaver kind of scene. The thing is, even if I hadn't gone back to school, I'm just not the June Cleaver type. But I do love my kids, and I don't want to scar them for life with Bad Mom Moments. Nobody means for their kids to turn out delinquents, but sometimes I feel like I'm following the formula for that outcome. Look at poor Vicky Valencourt. I'm sure her Momma went back to school and left her to fend for herself, and see what happened...

But hey, Zion really wants to play football, and he hopes to be able to play in college as well. So maybe like Bobby Boucher, he can use all the mistreatment he has endured at the hands of his mother to encourage him to play really well.

And hopefully he won't run across a little minx like Vicky Valencourt, because, well you know...

He did tell me yesterday (while his anesthesia was still wearing off) that I shouldn't feel bad about not being there for him for surgery. He said I could make it up to him once I'm a doctor. He even sang a cute little song:
Buy Me a Boat
Posted by Doc Veebs at 11:44 AM