Block 6 Week 1: Something New Every Day

So last week, huh? Apparently a lot of people read last week's post (well, more than usual anyway). I had a lot of feedback from the post, and I appreciate the encouragement that you all gave. I also heard a lot of stories that were way too similar to mine. I pray that those of you that have had similar experiences are able to find a place of peace and protection.

This week has been a hard one, honestly. School hasn't been a problem at all, though. Last Sunday a really close family friend and fellow church member passed away. This week has been full of preparing to say a final goodbye and comforting everyone who is feeling the loss. I wanted to be a lot more available to help out, but on Tuesday I came down with a horrible stomach bug, and I was down for the count for about two days. With that and keeping up with school, I've not been as helpful as I would have liked. Today we had the funeral and burial, and there were so many people who came together and leaned on each other for comfort.

I don't know if everyone else does this, but when I attend a funeral, I start thinking about loved ones that I've lost. I don't think of it as depressing or sad, though. I just like to reflect on people that I miss. One of the biggest losses I think I've experienced is that of my paternal grandfather. He died in a car accident about three weeks after HB and I got married. He's been gone more than 25 years, but I still feel a huge empty hole where he is supposed to be. I used to go to yard sales with Poppa and Granny on Saturday mornings sometimes, and I spent the night at their house all the time.  I remember watching Wheel of Fortune and Family Feud with them in their living room. They were a very big influence on my life as a kid, and my Poppa especially taught me a lot of cool things. One of his favorite things to say (usually after I goofed up something) was, "You learn something new every day." He often said it sarcastically, but he was absolutely right. Sometimes I think of how many days it has been since he died and how many things I've learned on those days. I wish I could sit and talk to him about all the things I've learned.

There's this silly thing that I've done for almost my whole life that I can't believe I'm going to share with you guys. So there's this cute little picture of Aubie (War Eagle!) that I've always thought looks like my Poppa. He looks like this: 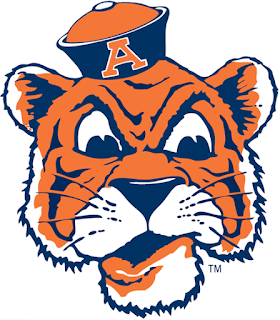 It's like if Poppa were a tiger, this would be his face. Yes, it's silly. I have a huge sticker like this on the back window of my car (2007 Ford Mustang, YES!). But whenever I look in my rearview mirror and see Aubie's face, I think about Poppa and I kinda feel like he's keeping an eye on me. I think when we miss people really bad, there are little things that can bring comfort and a reminder of how much you love them, even in their absence. I don't know if it makes it sting worse or it softens it a bit, maybe a little of both at different times. But whenever I feel like the world is really hard, I just think about Poppa watching and I hope he's proud.

There's a song that I hear sometimes, and it still busts me up pretty bad. It's called Beam Me Up, and it's about losing someone, and what you would do if you had a minute to see them again. I don't know what I'd say if I could talk to Poppa for just a minute, but I'd sure love the chance. I wouldn't feel the need to tell him I loved him the whole time because we said it to each other all the time, and he knew it. I don't have any regrets with our relationship, just that it ended too quickly. But the lyrics to the song are:
Beam me up
Give me a minute,
I don't know what I'd say in it.
I'd probably just stare
Happy just to be there holding your face.
Beam me up
Let me be lighter,
I'm tired of being a fighter.
I think a minute's enough...
Could you beam me up?

OK OK Now that I'm sobbing like a baby, I promise next week's post should be a little bit lighter. Have a good week!
Ciao!